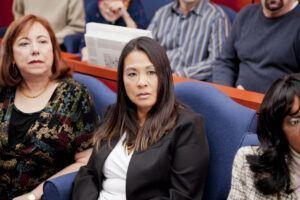 The Pennsylvania Supreme Court is deciding whether five witnesses in Bill Cosby’s 2018 sexual assault trial should have been barred from testifying about “prior bad acts” that may have influenced the jury verdict. The prosecutor used the testimony to establish that Cosby engaged in a long-term pattern of inappropriate sexual behavior. Cosby was ultimately convicted and he remains in prison while he pursues his appeal.

During the Pennsylvania Supreme Court hearing in December, Cosby’s defense lawyer Jennifer Bonjean argued that the trial court’s decision to let witnesses other than complaining witness Andrea Constand testify prejudiced the jury against Cosby. She argued that the jury convicted Cosby not necessarily for assaulting Constand but as punishment for his alleged acts against the other women.

“A defendant must be tried for what he did and not who he is,” Bonjean argued. “Once the jurors heard the five women’s accounts, he had no shot. The presumption of innocence just didn’t exist for him at that point.”

The justices seemed to side with Cosby’s attorney on this point. “I tend to agree that this evidence was extraordinarily prejudicial to your client,” Justice Max Baer told Bonjean. Justice Debra Todd asked the prosecutor, “Why did you need prior bad acts evidence at all?”

While the Cosby case is higher in profile than most criminal proceedings, the court’s eventual decision will likely have a wider impact on prosecutors’ attempted use of prior bad acts testimony in sex crime cases. Rape, sexual assault and other sex crimes are notoriously difficult for prosecutors to prove. The cases often devolve into a he-said/she-said situation. That is why prosecutors often try to include evidence of the defendant’s alleged prior bad acts.

Pennsylvania Rule of Evidence 404 allows prosecutors to use evidence of a prior crime, wrong or other act to prove motive, opportunity, intent, preparation, plan, knowledge, identity, absence of mistake or lack of accident. However, such evidence is admissible only if its probative value outweighs its potential for unfair prejudice. Moreover, the rule specifically bars use of such evidence to prove a defendant’s character in order to show that the defendant acted in accordance with the character.

Sex crime defendants can expect their entire lives to be turned upside down as prosecutors look for any evidence of past indiscretion. This is why anyone accused of a sex crime in Pennsylvania should seek out a highly experienced defense lawyer who knows how to argue against the admissibility of such evidence.

If you have been charged with a sex crime or believe you are under investigation, call Matthew R. Zatko, Attorney at Law right way. The sooner my Somerset law firm gets involved, the sooner we can begin our own investigation and start building a defense. Reach me by calling 814-443-1631 or contact me online for a free consultation.