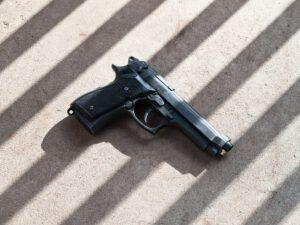 In 2015, the Pennsylvania Supreme Court ruled that mandatory minimum sentences for most offenses, including those relating to firearms possession, are unconstitutional. However, a proposal by a freshman representative from Philadelphia has reignited debate over the issue and has shown that plenty of lawmakers and citizens seem to support mandatory minimums for weapons crimes.

In March 2021, Democratic Rep. Amen Brown introduced legislation calling for imposing mandatory minimum sentences on people with felony records who are convicted of possessing a gun. Specifically, these offenders would face mandatory minimums of between two and 10 years depending on their criminal history. The proposal would also allow people with certain types of prior convictions to be held without bail.

Whether Brown’s bill passes depends upon it gaining bipartisan support, since Republicans control both chambers of the legislature. In the meantime, despite the Supreme Court’s 2015 ruling, mandatory minimum sentences can still be imposed for certain specific offenses.

Judges are required to impose minimum sentences set by statute when a person with a prior violent crime conviction is convicted of a second or third violent crime. Currently, a conviction for a second crime of violence leads to a mandatory minimum of 10 years in prison while a third conviction carries a 25-year mandatory minimum. Violent crimes include homicide, rape, aggravated assault, arson, kidnapping, burglary, robbery and several other offenses.

In addition, convictions on federal charges can carry mandatory minimums even if the equivalent state crime does not. As such, it is important to understand what type of charges you face and enlist the help of a defense lawyer who has experience in both state and federal courts.

Whether this is your first time being accused of a crime or you have prior convictions on your record, you deserve a strong defense. That is what my law firm, Matthew R. Zatko, Attorney at Law, strives to provide to every client. Call 814-443-1631  or contact me online to arrange a free consultation. I serve clients throughout Bedford, Cambria and Somerset counties.