Free Legal is a Bad Bet 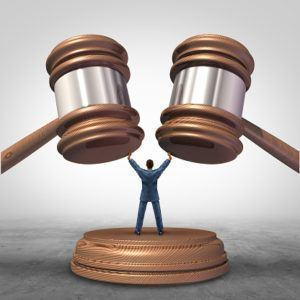 You’re sitting in the courthouse on the most stressful day of your life waiting to make your case in hopes of avoiding months or years in jail when a person in a wrinkled shirt walks up to you.  In their arms is a heaping pile of papers and folders which threaten to scatter to the floor as you are asked for your name.  This is your Court Appointed Public Defender.  After learning your name, this stranger sorts through the disarray to find your file hoping to learn last-minute what you’ve been charged with.  While you’re trying to explain your situation, you are shushed, while the attorney mumbles an inaudible list of jargon you don’t understand.  Knowing you’re next, you are ushered into the courtroom and told to plead to a charge of numbers and letters that mean something less than what your actual charge is, swearing that it’s your best option and it poses a lesser sentence than you’d be facing without this "HELP".  Numbly, because you’re stressed and confused, you agree and trust this person with your freedom.  After the Judge issues your sentence, you walk out of the courtroom with the sheriff's deputy and after getting a handshake from this attorney and a wish of good luck, they are off to find the next client on the waiting bench.

Imagine a different scenario; you’ve hired a private attorney. It’s a day poised to produce anxiety but you are not alone. You meet your attorney in his office and walk to the courthouse together.  Both he and his associate have spent the hours and weeks and months going over your case and know it by heart.  All three of you know exactly how today is going to play out so you spend a few minutes relaxing and talking about your personal life. When you step in front of the Judge, your private attorney exudes confidence, wearing his success like a tailored suit, and demands that the prosecution show leniency.  You paid for this result and know when the Judge issues his decision on your future, you can walk away with confidence.

That’s the exact experience of “RYAN“. You can read his story here. (Pieces have been redacted for the client’s safety)

If you are arrested, you have a constitutional right to an attorney at public expense. However, even if you qualify for a public defender, it can be shortsighted to accept their services simply to save some money upfront. Because what you get from a private attorney is often the most important qualifier of all: experience. Public defenders are generally hardworking and conscientious professionals, but they get ground down by a system that does not adequately support their efforts. Stories of overworked public defenders being outmaneuvered by aggressive prosecutors are legendary.

Tina Peng, a public defender in New Orleans, wrote a scathing op-ed that appeared in The Washington Post, which stated bluntly, “It’s impossible for me to do a good job representing my clients.”

Because such a high percentage of criminal defendants are indigent, or low on funds, there isn’t enough funding for public defender offices. So, public defenders routinely handle 50 to 100 percent more cases than they should and wind up giving those cases 30 to 50 percent less attention than they require. Even the most idealistic young lawyers cannot continue to work in a system that frustrates their efforts, which is why after they get a little courtroom experience, they move on to other areas of practice. That means the majority of public defenders are inexperienced lawyers cutting their teeth on misdemeanor and felony cases that require a greater level of skill than they can provide. And if, by chance, you happen to draw an experienced public defender, does his or her experience include trial work?

To maximize your chance of a favorable outcome, you need an attorney who offers advantages over and above what a public defender can provide: