Guilt by Association in Drug Cases 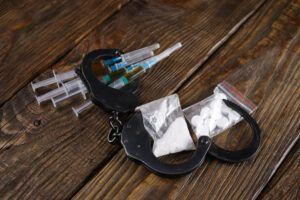 Guilt by Association in Drug Cases

If you’re like most people, hearing the phrase “drug possession” brings to mind someone caught with drugs in their hand, in their jacket pocket or even hidden in their shoes. It’s relatively easy to understand — the person had drugs on them when they were arrested. But did you know that a person can be arrested and charged with possession even if the drugs were not physically on their person?

Pennsylvania’s doctrine of constructive possession allows prosecutors to bring drug charges in situations where the substance was not actually being carried, held or touched by the defendant. A person can be found in constructive possession of drugs simply by having both the intent and the power to control the contraband. The prosecutor must prove both elements beyond a reasonable doubt to get a conviction.

Proving power to control is usually the easier part for prosecutors. They will often attempt to show that the drugs were in close proximity to the defendant, who could have easily walked over and picked them up and taken them or moved them.

Proving intent to control is much more difficult. Intent is determined from the totality of the circumstances surrounding the arrest. Prosecutors may attempt to prove intent through such evidence as:

Constructive possession ordinarily isn’t established by any one factor but by a combination.

The difficulty of proving constructive possession can protect innocent people from being convicted of crimes based merely on the fact that they were near drugs. For example, if you are watching TV in your room and your friend puts a bong on the coffee table, you can’t necessarily be convicted of possessing drug paraphernalia just because the bong was near you, since you didn’t necessarily have the intent to possess it.

Because every fact matters in these cases, defending them requires great skill in cross-examining police officers and witnesses and in challenging the physical evidence. Matthew R. Zatko, Attorney at Law has more than 20 years of experience representing people against drug charges in Pennsylvania. Call my Somerset office at 814-443-1631 or contact me online for a free consultation.