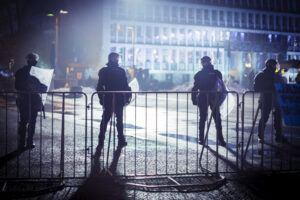 Federal prosecutors in Philadelphia and other large cities around the country have revived a little-used criminal law from the 1960s civil rights era to charge protestors with obstructing law enforcement during the unrest that followed the killing of George Floyd.

The Civil Disobedience Act of 1968 makes it a felony to “obstruct law enforcement in the commission of their duties during a civil disorder.” Legal scholars interviewed by NBC News said the law has rarely been used to prosecute anyone over the last 50 years. But since Floyd’s death in May during an arrest by Minneapolis police, federal prosecutors have charged people with the civil disorder crime in at least two dozen cases across the U.S.

Commenting on the sudden revival of civil disorder charges, Stephen Kanter, an attorney and dean at Lewis & Clark Law School said, “It’s not normal to have this amount of aggressive federal law enforcement in situations where the state and local jurisdictions are functioning well and can handle these cases. In some cities, federal prosecution is being done against the will of the local prosecutor.”

The civil disobedience law notably gives federal authorities jurisdiction over matters traditionally prosecuted as street crimes by state and local governments. Federal jurisdiction can apply when criminal activity crosses state lines, violates a federal statute or is committed on federal property or against a federal official. It may also apply when protests in some way obstruct, delay or adversely affect interstate commerce.

The exercise of federal jurisdiction is significant because the civil disorder charge is a felony carrying a sentence of up to five years in prison. That is a more severe sentence than would be imposed for conviction of disorderly conduct in Pennsylvania, which typically is a summary offense punishable by no more than 90 days in jail and a $500 fine. At most, state law allows for a misdemeanor charge carrying up to a year in jail.

According to NBC’s reporting, the Justice Department declined to comment on the spike in civil disorder charges and whether it was part of a directive by the Trump administration to get tougher on protestors.

Whatever the reason for the new, aggressive use of this federal law, it is clear that anyone involved in protest activity who is charged with a crime should retain a skilled criminal defense lawyer with experience in federal court.

At my Somerset law firm, Matthew R. Zatko, Attorney at Law, I have more than 20 years of experience representing clients in federal and state courts throughout Pennsylvania. If you are accused of civil disorder or any other crime, I can quickly assess the situation and take action. Call my office at 814-443-1631 or contact me online for a free consultation today.