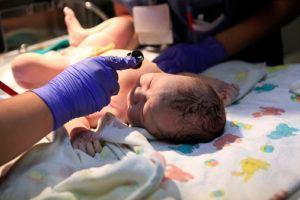 A jury in Pennsylvania awarded a couple $14.5 million in damages after finding an obstetrician’s negligence during delivery of their child caused brain damage, cerebral palsy and other permanent harm. According to the Altoona Mirror, the trial in federal court lasted two weeks and the jury deliberated four hours before returning the verdict, which apportioned 60 percent of the fault to the doctor, Thomas A. Carnevale, while holding Clearfield Hospital 40 percent liable. At issue was the use of the drug Pitocin, administered by Carnevale and two hospital nurses to the mother, Nicole Welker.

Pitocin is a natural hormone that causes the uterus to contract. Doctors commonly use the drug to induce labor, strengthen contractions during childbirth, and control bleeding after childbirth. However, there are numerous side-effects, which can actually make delivery harder on the mother. These include:

Attorneys for the parents argued the Pitocin injections were unnecessary and caused hypoxia (lack of oxygen) in the womb, resulting in brain damage. The plaintiff’s complaint alleged that Pitocin was given to Ms. Welker unnecessarily for labor “augmentation” at the first and the second phases of labor. Her baby boy was “delivered after troubling monitoring indications and was intubated at five minutes old.”

The boy suffered catastrophic injuries and the jury decided the defendants had to be held accountable. The damage award breaks down as follows:

Proving medical malpractice is never easy, and going to trial rather than settling has its risks. Although most children in the United States are delivered without serious incident, childbirth is not without risks to both mother and child. Attorneys for the plaintiff should be commended for persuading the jury that the harm to the child was a direct result of medical negligence.

Matthew R. Zatko, Attorney at Law prosecutes medical malpractice lawsuits in the Somerset, PA area. Call us at 814-443-1631 or contact my office online to schedule a free consultation.